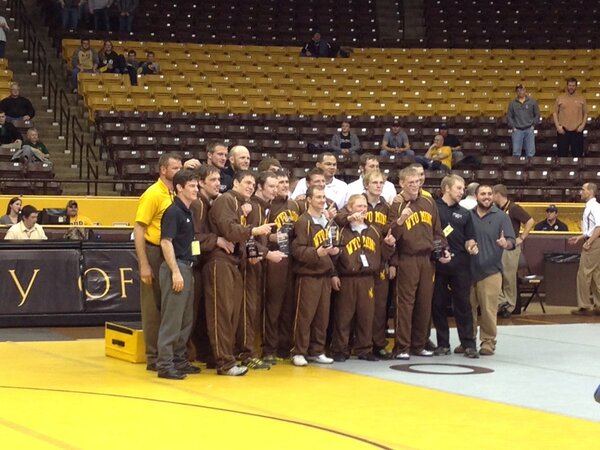 The Cowboy wrestling team poses with their individual trophies, as well as their team championship trophy after winning the WWC tournament on Saturday night.

The Cowboy Wrestling team pulled off a comeback Saturday night for the ages. At the beginning of the championship round the Cowboys were sitting in fourth place behind the tournament favorite, North Dakota State. The Pokes were down 11 points to the Bison with 10 matches to be played out. The best hope Wyoming had? All 10 wrestlers were still alive in the finals round, which no other team in the tournament did.

Cowboy wrestler Tyler Cox started things off in the championship round in a 3rd place match vs. Jade Rauser from Utah Valley State. Cox already  had a bid to the NCAA tournament sealed up, but this would be a small bit of icing on the cake for the Gillette native. Cox earned a pin his match, sending him to the NCAA tournament on a high note.  Up next for the Cowboys was 133 pounder Kasey Garnhart, the Ten Sleep native. Garnhart battled hard but ultimately went down 3-0 to Chase Tolbert of Utah Valley State. Garnhart finished his UW wrestling career last night in Laramie.

After the Garnhart loss at 133 the Cowboys would get rolling in the championship round. At 141 McCade Ford brought home Wyoming’s first championship by earning a 5-2 decision over Utah Valley State’s Avery Garner. Brandon Richardson kept is going with a 6-4 victory over Dustin Walraven from South Dakota State to earn third place.

Rock Springs native Andy McCulley suffered a disappointing loss in the semifinals to South Dakota State’s Cody Pack, sending him into the consolations. From here on out it became win or don’t go to the NCAA tournament. McCulley won his consolation match vs. Anthony Caputo of North Dakota State. In his third place match McCulley was involved in one of the more thrilling matches of the championship round where he defeated Ethan Smith of Utah Valley State in overtime. McCulley’s third place finish may be enough to get him into the NCAA tournament as an at-large bid.

Senior Alfonso Hernandez continued his domination on the mat with two huge victories for the Cowboys. His first was a pin in the semi-finals over Joshua Mohr from Air Force setting up a pivotal championship round match between him and Kallen Kleinschmidt from North Dakota State. UW needed a huge win here to have a chance at beating the Bison. Hernandez turned in a dominating 22-7 technical fall over the Bison wrestler to bring the Cowboys to a half point ahead of the Bison going into the final match.

Wyoming’s undersized big man Leland Pfeifer headed into this third round match having notched two wins in his belt this season.. his previous round matchup being the 2nd to get him into the championship round. The pressure was on Pfeifer to deliver. If both Pfeifer and North Dakota State wrestler Evan Knutson lost, the Cowboys would be champions. However, the Poke heavyweight delivered in memorable fashion defeating Air Force’s Bentley Alsup to claim third place, and the clincher for the Cowboys was Knutson going down in overtime to Utah Valley State’s Adam Fager.

Wyoming finished with 79 team points, three better than North Dakota State’s 76 points. Behind them was Utah Valley State at 70, Air Force at 63.5, and South Dakota State at 16.5. Representing the Cowboys in Des Moines will be Tyler Cox, McCade Ford, LJ Helbig, Shane Woods, and Alfonso Hernandez. Andy McCulley will find out later on if he has been selected as an at-large to the tournament. The NCAA tournament will be March 21.